The Samurai Who Embraced The Dark / Daniel Moor 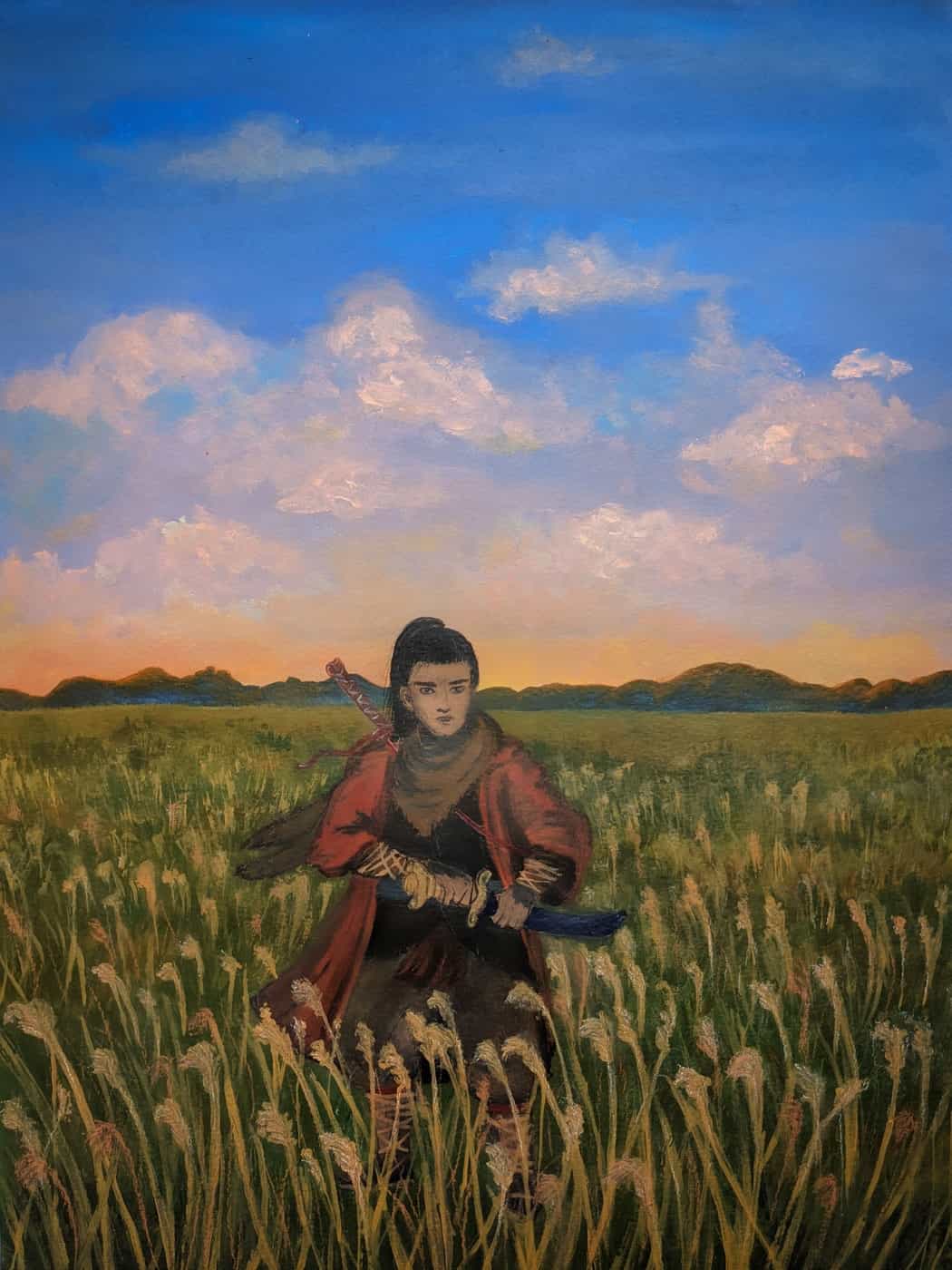 The Samurai Who Embraced The Dark / Daniel Moor

The Samurai Who Embraced The Dark – A Story

I sent this story to my Wonderful and talented friend and client Audrey Mey and she painted some rather really gorgeous pictures to illustrate it more powerfully.

Sometimes we reject parts of ourselves to the dark, sometimes we deem them wrong. Sometimes we condition our love to only half of our being and leave the other half behind. But I want to invite you to say “no more” to doing so.

I hope this resonates, I hope you find this helpful, I hope that this intrigues, I hope this story proves to be as insightful for you as it is for me.  Thank you for letting me share.

The Samurai Who Embraced The Dark/ By Daniel Moor, Illustrated By Audrey Mey

He is prepared for his final journey, with his long Katana Samurai Sword at the ready.

He has a long road ahead and had passed a long one already. He has a sharp look in his eyes, his hair long and black, wrapped up in a perfectly meticulous ponytail as all Samurais know how to make.

His Samurai sword, enchanted with the power of awareness and truth, will be his biggest protection, and boy will he need it.

He has slain many demons, big and small, hard battles were fought, long ones as well. He became a seasoned Samurai on the path, no longer a rookie, he is now a true Shinobi, a rare sight to behold in these times, a rare warrior he was indeed.

But this time it’s his biggest journey yet, he knows that he is well prepared. He carries an intense sharp gaze that can notice the smallest details and smallest movements of his enemies and prey, he is on the hunt for the beast that is only known as: “The Darkness”.

This one is a much more clever one than his former opponents and he’d have to be sharp and extremely present, it is not the typical monster either. It is very cunning and very elusive.

He is ready to face it, but where is it? It’s hard to find, he had never seen it, he had only seen all the destruction it had caused. He knew he had to stop it once and for all.

There he was, in the place where it was last seen decimating people to death and sucking their souls. He’s in an open field of grass, he sees the setting sun on the horizon, the sky is colored in the most perfectly beautiful merging between fire and water, but the Samurai is not ready to be distracted right now by beauty. The field is a wide-open space, it’s starting to get darker, the wind is breezing, slightly moving the small frickles of hair in the Samurai’s ponytail, it’s getting a bit cold. The shinobi is still standing there, hands on his waist ready to pull his sword at any moment, Scanning his surroundings looking for the beast that cannot be found with the usual 5 physical senses of man, he feels calm, confident yet extremely vigilant, he is patient in waiting. 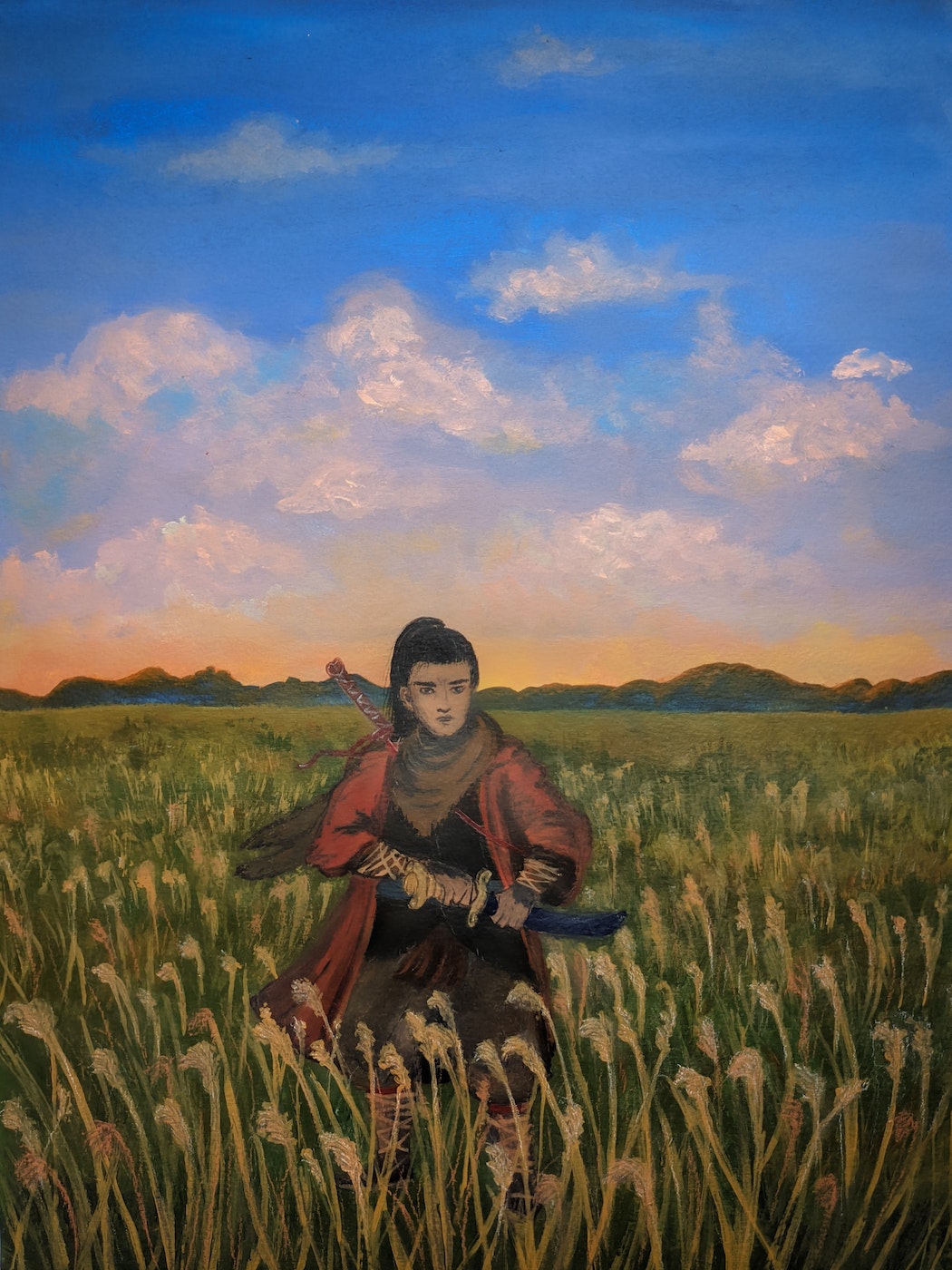 Suddenly, he senses a dark presence, a dark force that is moving around, he could sense its strength, yet he is unwavering, he has the confidence of a thousand battles and though this might be the biggest one yet, he’s full of faith. He’s taking a  deep breath to stay focused and centered. A seasoned shinobi, he knows what to do in these types of situations, he’s been in them plenty of times before. He has his feet firmly on the ground in a strong stance and a gentle yet fierce smile on his face, eyes still searching for where this dark beast he senses is.

After waiting for many hours, he gets restless and shouts: “Darkness, where are you!!!! show yourself and battle me if you dare!”.

Nothing, still no answer.

He shouts again: “Show yourself you coward!”.

t’s completely dark now, pitch-black and the samurai is feeling tired. This beast is relatively hard to find and so he decides to go back to his camp, sleep the night and look for it again tomorrow. But just as he was about to go he heard a little boy’s voice begging: “Wait! Please don’t leave me, please don’t let me go! I need you, sir, Please don’t leave I’m all alone!”

The Samurai, not up to being distracted shouts: “What are you doing here boy! go home! it’s not safe here! Haven’t you heard of what the monster of darkness did here a few days back?! It cuts its victim’s souls in half and possesses them for eternity. Mo longer are they beings of light, but being of darkness they become, it has done this to thousands, no millions. It has done this to my family and friends, to everyone I’ve ever loved. I’ve come to end this forever and set us all free”.

“But wait!” Said the little boy.

“What now!” Yelled the Samurai with angry frustration. As he turned around to shout! He caught a small glimpse of the boy and the boy looked familiar, but he had no time for that now.

“What about it?” said the Samurai, not ready to hear another word from this boy he deemed as a foolish distraction.

“What!!, What are you talking about fool!” shouted the samurai.  But suddenly something major started to happen. His body started to morph and transform. He started growing bigger and bigger, his skin turning black, his hands becoming longer and longer, legs growing further apart, his body no longer matter but now a pure dark force, eyes gleaming red and mouth filled with big sharp black teeth!”. 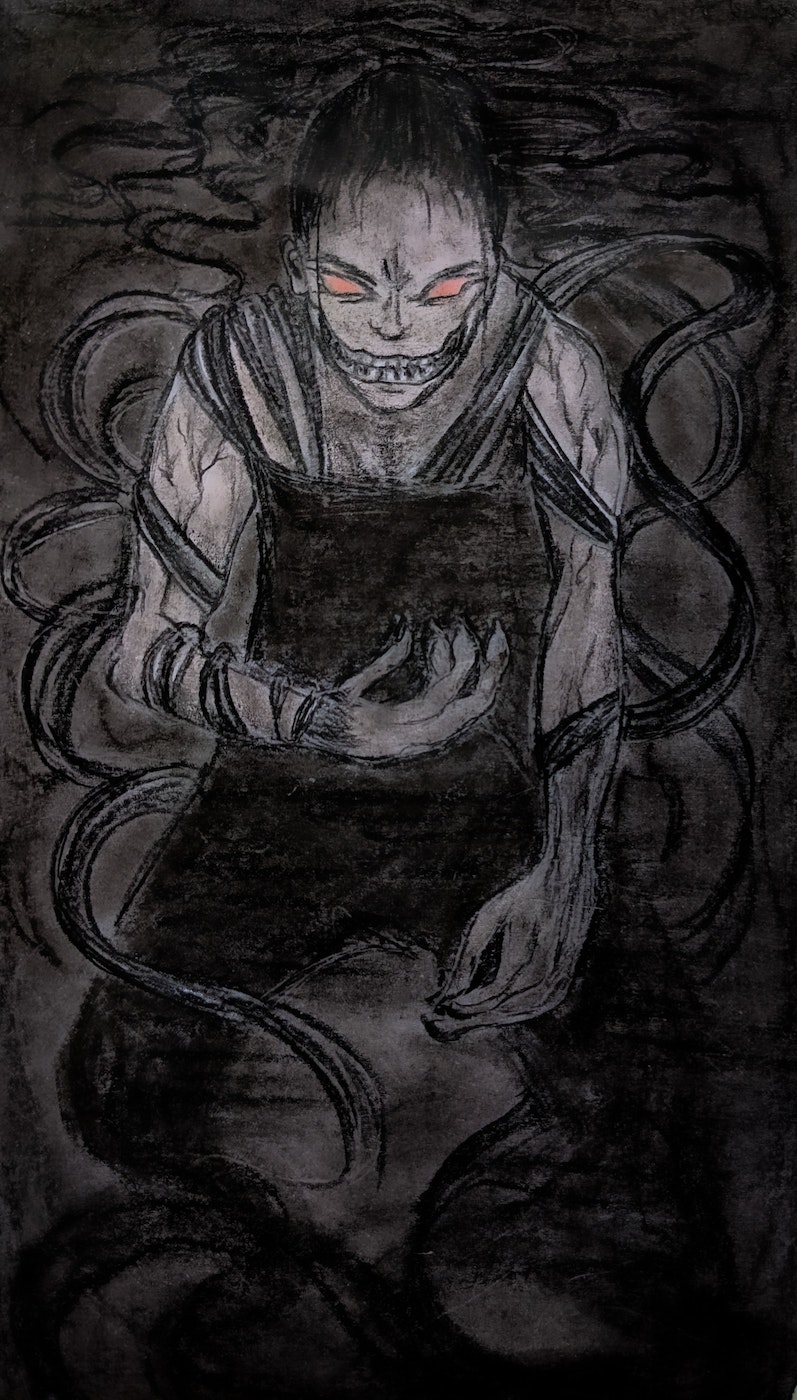 No longer a Shinobi, the dark monster has taken hold of him as it does on many nights.

A tragic story, the samurai always forgets it is he that has the monster inside of him. Unwilling to face the truth, he is in an endless search for it in the outside world during the day, never to find it, becoming more and more devastated as he sees his loved ones die and become possessed, as he sees so many villages perish.

But this night was different.  Somehow, in the chaos, he now had awareness of himself inside that beast, while he saw it chasing the boy who was now desperately running for his life.

He commanded his now dark beast-like body to stop, but it wouldn’t. He shouted at it, demanded it to stop with threats, but it didn’t work. He tried to fight it and control it but couldn’t. The shinobi was so exhausted and powerless that he had for the first time after a thousand battles decided to give up.

The boy, still running from this gigantic dark beast chasing him was yelling: “Shinobi, please don’t give, up we need you! I need you! Please, I’m begging you, you’re still strong!”.

“But how!” said the Samurai, “I have fought a thousand battles never to lose, but never anything like this!”.

” I have fought many opponents, but never fought myself”.

The Samurai, first not understanding at all, trying hard to remember, suddenly has a flashback that sends him right into the past.

It was his old master, Lao, a samurai and sage. It was the first day of samurai training, a grueling study of the arts of warfare and death that lasts 25 years. He was only five years old at the time and he couldn’t bring himself to use his sword, not even to hurt a fly. The old master asked him to practice using it to slice bamboo trees, but he just wouldn’t do it. “I hate this, I hate this! It’s too violent!” he said and kept shouting in sadness and hurt, “I don’t want this! I want to only be a son of light! I want to grow trees and fruits, I want to grow life and help people! I don’t want to be a son of the dark master! I really don’t! Please, let me do something else! let me help in a different way!” he begged.

Lao gently smiled, he was calm, warm, and had a wise, caring, and nurturing look on his face.

“My dear son”, said Lao. “Do you want the key to being a true samurai? A true shinobi? A true angel of love, life, and everything that is beyond?”.

Here is the secret key of the true samurai son, here is the key to becoming a true shinobi:

“A true samurai is not afraid of the dark, he lets his light embrace the darkness and his darkness embrace the light. That is true mastery, that is Yin and Yang, that is what being a shinobi is all about”.

At that moment, the now old and seasoned shinobi remembered what he had long forgotten that his master once told him. It was an enlightening experience and the boy, still running from the monster, could feel that something had changed. Looking at the monster he had become, the Samurai had only 3 words to say, the 3 most important words in the world and he said them from his heart: “I love you”.

At that moment, an explosion of light and dark merging in a beautiful dance lit up the entire forest skies and nearby towns, as the big dark monster started shrinking down and the samurai returned to his normal human bodily form. He took a deep breath and thought to himself that he hasn’t felt as whole as he feels now in a while, but something was still missing.

As the boy from before came running in front of him, he realized exactly what that missing thing was. The boy’s face looked familiar before, but now he knew why. That boy was him, at 5 years old, on the first day of training. He looked at the boy’s eyes as they both cried in tears of pain, love, and relief all at the same time. He hugged the boy and the boy hugged him back and as they hugged, they merged into one single being.

No longer cut in half, the samurai was now a true master of light and dark. Realizing the truth, he knew deep down that to go beyond light and dark, he has to embrace both. Such is life, such are the forces of life, death, and the universe.

He had decided to go back to his village to teach what he’d learned. Living for many years, he left his body at 98 years old. Remembered as a true master and bringer of love and truth, his teaching was the same as of the sages that came before him. “Let your light embrace the darkness and your darkness embrace the light”, he’d always remind his faithful students. “To go beyond light and dark, you have to embrace both”, he’d often continue saying. 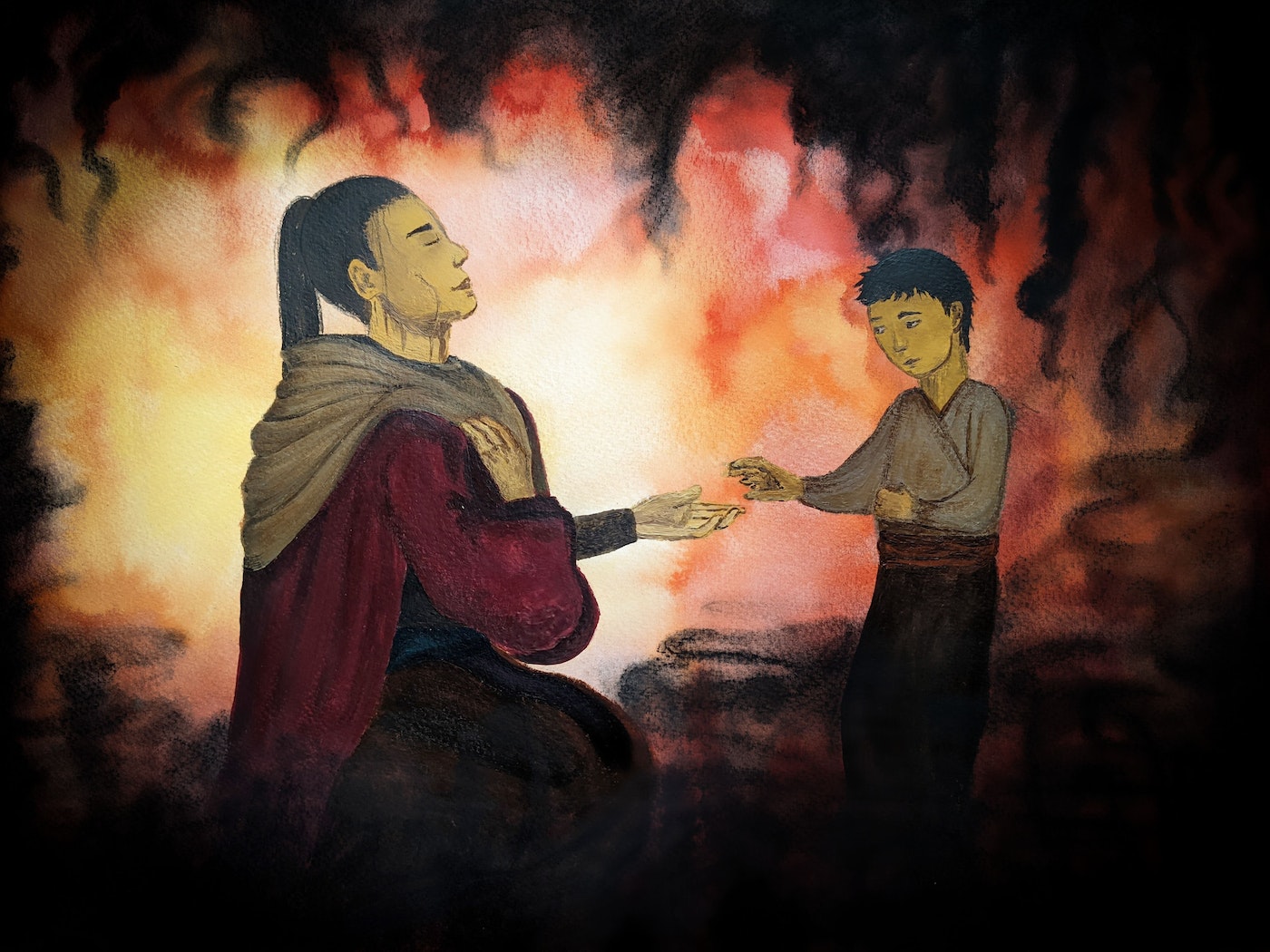 The world was never the same after his appearance, he is remembered truly as the savior of earth.